You are here: Home / The Breakdown of Fly Casting – A more Technical Look

As simple as this may sound, in order to catch fish, one must get their fly out to where the fish are. Fly casting, that is, placing a fly into or onto the water, is very different than all other forms of casting. Unlike having weight to pull your line off a reel, the fly line is the weight that propels your fly to 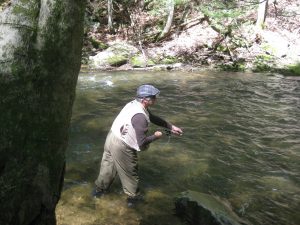 its location. Developing the technique or skills to deliver your fly is what fly-casting is all about. What is the breakdown of Fly Casting, well let’s take a more technical look.

I would be the first to tell you that many guys catch trout on fly rods and do so with the clumsiest of Fly casting techniques and with the poorest approach and presentation there is. In many ways, the beauty of fly fishing is, if you’re catching trout perfect! But to fly fish with increased odds to your favor, developing a good technique of casting is really a must. So let’s take a look at fly casting.

How does casting really work?

I need to pause here for a second and have you picture in your mind an important aspect and that is the word  “load”. To cast a fly line requires energy and the transfer of that “energy” down the line. We refer to this energy as “load”.

To illustrate what I mean, imagine a rubber band sitting on a table. A rubber band sitting on the table does just that, sits there. But if one pulls on it, the stretch of the band builds “load”. Let go of one end and the “energy” of the stretch snaps it back towards the other end. Now don’t be offended by my elementary or wrongly worded approach to explaining this but instead bare with me and understand, when a fly rod lifts the line off the water, as the tip of the rod bends slightly under the weight of the line, it is building “load”. The more pull on the rod or “loading”, the more energy is being “loaded” to the line. Keep this in mind as we move on.

The Components of The Cast

The act of fly-casting can be broken down into several component parts, which are, elimination of slackline, acceleration, efficient loop formation, casting stroke and pause. These make up the components of a cast. Let’s examine each of these and look at what they mean and do.

Slack elimination is the most efficient way to cast a fly line. To begin each cast having a straight line from rod tip to fly eliminates the slack and allows the rod to load properly, otherwise, the casting stroke will have a portion of the stroke wasted by having to remove the slack. 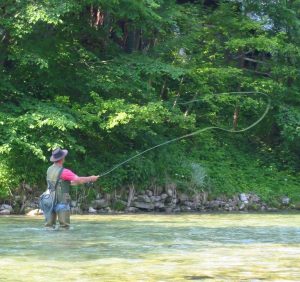 Acceleration is really the function of the hand on the rod and the ability to load or bend against the resistance of the fly line. As the rod hand goes into motion it accelerates in speed until the rod reaches a perpendicular position to the target. The hand speed then increases in speed from this point and ends with a short abrupt stop. Most of the acceleration actually happens near the end of the stroke.

The rod tip creates loops in the line when casting and the caster generally creates, for the most part, four looped shapes when casting. A “straight-line path” to the target, when done properly, will make a narrow loop and an accurate placement of the fly onto the water will follow. The top portion and the bottom portion of the loop should have a separation of about 20” with the top of the loop traveling directly overhead of the bottom portion during the cast. The narrow loop has a better wind penetration capability as well.

The second path is called a Convex path. In this case, the rod travels in a large upward arc instead of a straight line. This widens the loop and decreases wind resistance. The end result is a loss or compromise of accuracy.

The third path the rod tip travels is called a Concave path. This path is created when the rod tip travels in a downward arc forming a closed or tailing loop. The tailing loop compromises a full turnover of the loop and therefore also compromises accurate fly placement. Often too, what are known as wind knots are made in your line. Wind knots are literally little knots that appear in your leader from the line’s ability to, in a sense, pass through itself to form the knot.

The fourth path is the Lateral path of the rod tip. This movement of the rod tip is swinging out to the right or left instead of moving in a straight target plane. It’s often referred to as the “swinging loop”. In other words, the top of the loop is out farther left or right of the bottom loop. To put it plainly, it’s a casting fault that creates this loop.

The length of the line being cast determines casting stroke. It stands to reason that a shorter cast is made with a shorter stroke as is a longer cast 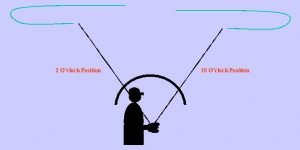 is made with a longer stroke. The weight of the fly line is distributed over its length of course, so a shorter line will weigh less than a long line. Proportionally so, the load and rod bend will be less or more depending on line length. The key to forming a good loop, in this case, is matching the casting stroke to the amount of tip bend to maintain the proper straight-line path.

Pause is also referred to as timing. This Pause takes place as one moves his hand from front to back and front again. The timing evolved is letting the loop straighten before beginning the next stroke. This loop straighten is “loading” the rod. If the timing is off, the loading does not occur properly. Slack then develops in the line allowing the line to fall towards the ground. Pause is the key, to good casting.

I know what you may think after reading the above. What crazy scientist came up with all of that technical mumbo. But if you think about it in simple terms, where ever the tip of the rod goes the line must follow. The act of casting takes practice and after time it becomes easier and smoother. Every good caster develops a rhythm to his or her cast. I once had a guy say to me that he casts his fly rod in a manner the same as throwing a dart. He pushes his rod forward rather than the typical attempts to flick your wrist. His explanation was very helpful. As you continue to learn to cast you’ll see how each of the above loop descriptions will take place. Noticing them will help you develop your style and skill level.

The last thing I want you to remember about all this is, no matter how bad you may be at casting a fly line, once the fly is on the water and presents itself just right to the trout, chances are good he’ll take your fly. Assuming, of course, it’s the right fly. The better you get at casting, the fewer trees you end up in and the fewer tangles you’ll have. You’ll spend more time fishing and catching. The above information is here to help you become a better fly fisherman. By getting a better understanding of, in this case, the cast. So use this information to help, but don’t get so serious that the fun goes away. If it isn’t fun well, it ain’t fun !!! 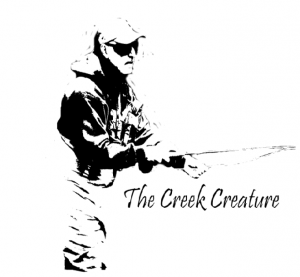